Are Global Carbon Emissions Slowing Down?

Initial data suggests that greenhouse gas emissions did not rise in 2014 despite global GDP increasing 3% (1). It’s the first time in 40 years that such a standstill cannot be linked to an economic downturn (2). 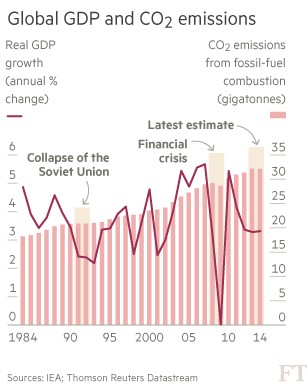 This decoupling of emissions and economic growth is an important step forward, as it suggests that the latter can increase without the former also rising. This is the key to achieving green growth.

It is not certain whether the pause in emissions increase is due mainly to national and international policies or economic forces. One major contribution is likely to be the reduction in coal burned in China. Coal makes up almost two-thirds of China’s energy mix, however ambitious reduction targets, improvements in efficiency and slow growth in heavy industry have led to an 11% decrease in coal imports in 2014 compared with 2013 (3).

Successes are being achieved elsewhere too. Countries across Europe are well on the way to meeting renewable energy targets – three European countries have already met their 2020 goals (4). 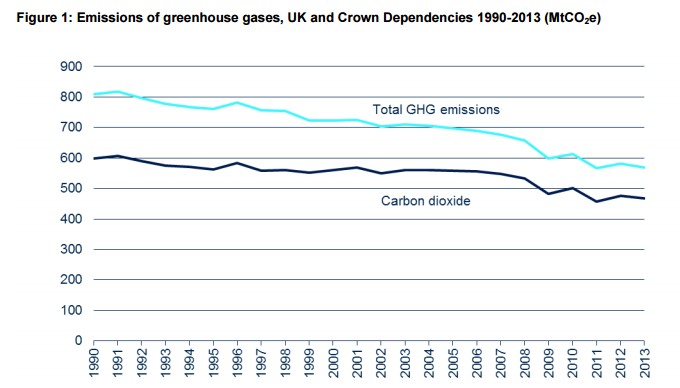 UK greenhouse gas emission levels have been steadily decreasing for the past two decades (5), a trend seen broadly across developed countries. Many commentators are concerned that this is due to the offshoring of manufacturing to countries like China, transferring rather than decreasing our emissions. However, UK Government data suggests that the largest recent reductions in the UK have been seen in the energy supply sector due to the decrease in the use of coal and gas, and also the waste management sector due to a reduction in emissions from landfill (5).

Out of the Woods?

It is too early to say whether this fall in emissions is the beginning of a new downward trend or simply a blip in our current upward one; while emissions did not rise in 2014, we did experience a surge in carbon dioxide the previous year. It is worth bearing in mind that the emissions data we have for last year is still preliminary and will not be confirmed until June.

In terms of absolute atmospheric carbon dioxide, as measured at the Mauna Loa Observatory in Hawaii, 2014 was another record-breaking year with 398.55 parts per million (ppm) CO2 compared to 396.48ppm in 2013 (6). There is concern that a reduction in CO2 storage by the world’s forests and oceans will outweigh small reductions in greenhouse gas emissions. Currently oceans lock away around half of the CO2 we emit, but as they become saturated the quantity they can draw down will decrease.

Even if emissions fall over the next few years, warming is still set to continue at a rate not seen for over 1,000 years (2). This is for the most part due to the complex nature of the climate system which contains many feedbacks and slow or delayed responses to forcing.

While the future of greenhouse gas emissions is not certain, the new figures do suggest a step in the right direction.
As Ed Davey, UK energy and climate secretary, puts it: "These figures show that green growth is achievable not just for Britain but for the world. However we cannot be complacent – we need to dramatically cut emissions, not just stop their growth. Getting a new global climate deal is absolutely vital, and the year ahead is going to be of critical importance."