Motor industry backlash against the 'demonisation' of diesel

The UK’s leading motor industry association has launched a campaign to fight ‘misplaced’ efforts to curtail diesel car use.  Fuel-efficient and with lower carbon dioxide emissions than petrol, 60% of cars sold in the UK today have diesel engines compared to just 14% in 20001.  However in a recent about-turn policy-makers are beginning to place tighter sanctions on diesel emissions, which until now have been less strictly regulated than petrol.  On 26th March 2015 Boris Johnson confirmed that the world’s first ultra-low emission zone (ULEZ) will launch in central London in 2020 introducing charges on older diesel vehicles, and the Mayor of Paris has suggested that diesels may be banned altogether in the same year.

Although a relatively small proportion of UK emissions are from cars (14% of toxic nitrogen oxide (NOx) emissions2), as this is emitted close to where people live, work and travel it has a disproportionately large impact on human health.  EU limits for certain pollutants are exceeded in 40 out of 43 UK regions, with some streets in London experiencing 3 times the legal limit3.  Diesel is understood to be a particularly large contributor, with combustion emissions made up of more than 40 toxic air contaminants including nitrogen oxide gases, carbon monoxide, sulfur dioxide and particulate matter (PM), tiny particles of soot that can infiltrate deep into the lungs and cause respiratory diseases and cancer4.  The World Health Orsganisation (WHO) has claimed that breathing diesel exhaust has a similar carcinogenic effect to passive smoking, causes heart disease, strokes and contributes to respiratory problems such as asthma and underdeveloped lungs in children. 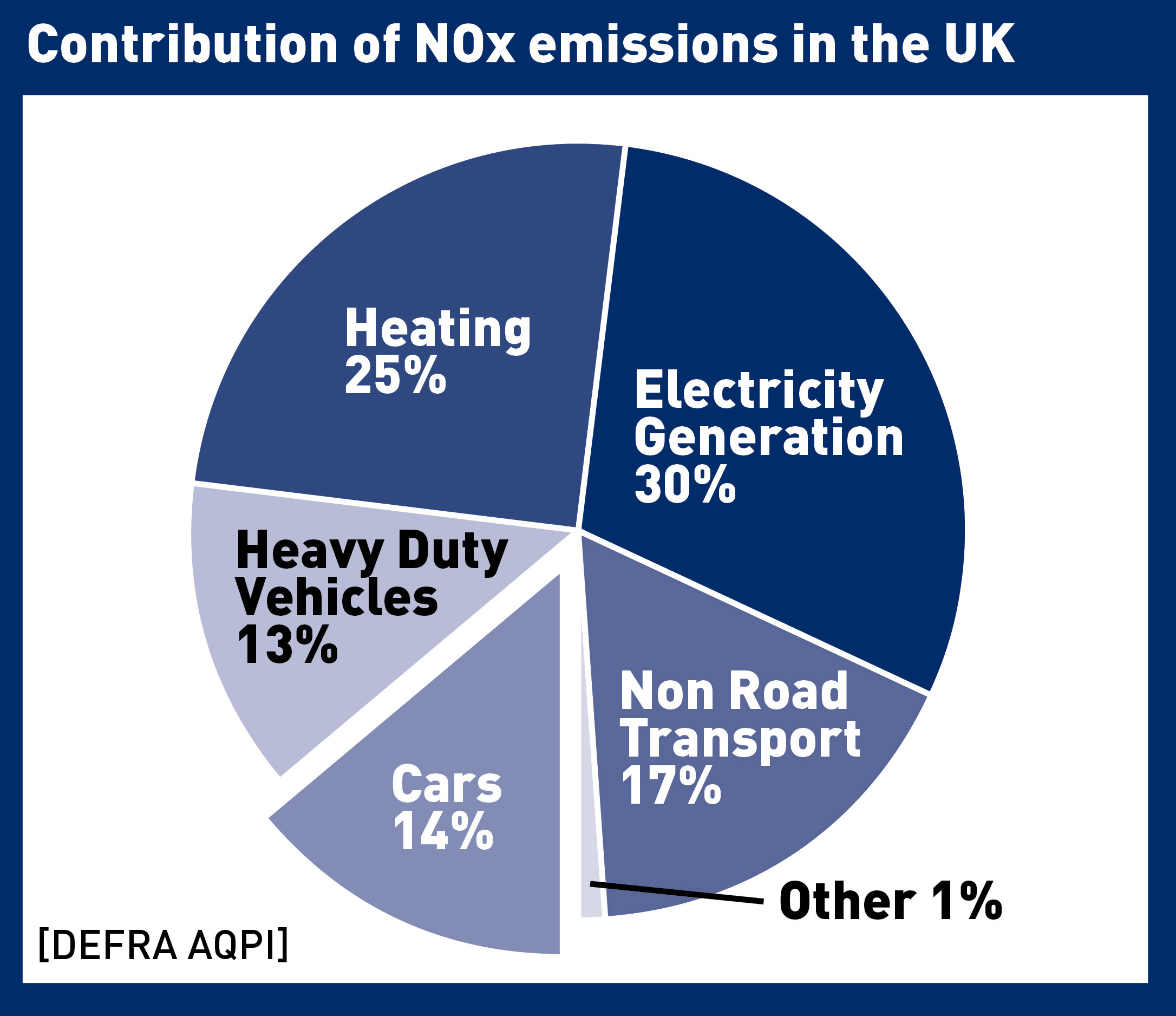 Response from the motor industry

The ‘demonisation’ of diesel has caused a backlash in the motor industry, which believes that improvements in diesel engines negate the need to crack down on diesel vehicles.  £1bn has been invested in diesel-specific production facilities in the last year alone2, and diesel vehicles are used by manufacturers to reduce the CO2 emissions of their fleet in order to meet European targets.

The Society of Motor Manufacturers and Traders (SMMT), supported by car manufacturers Jaguar Land Rover, Ford, VW and BMW, argues that the latest Euro-6 vehicle emission standards (applying to all cars sold from September this year) dramatically reduce NOx pollutants.  Cars that meet these new standards will release only one third more NOx than a petrol engine rather than three times as much as in previous Euro-5 standards. 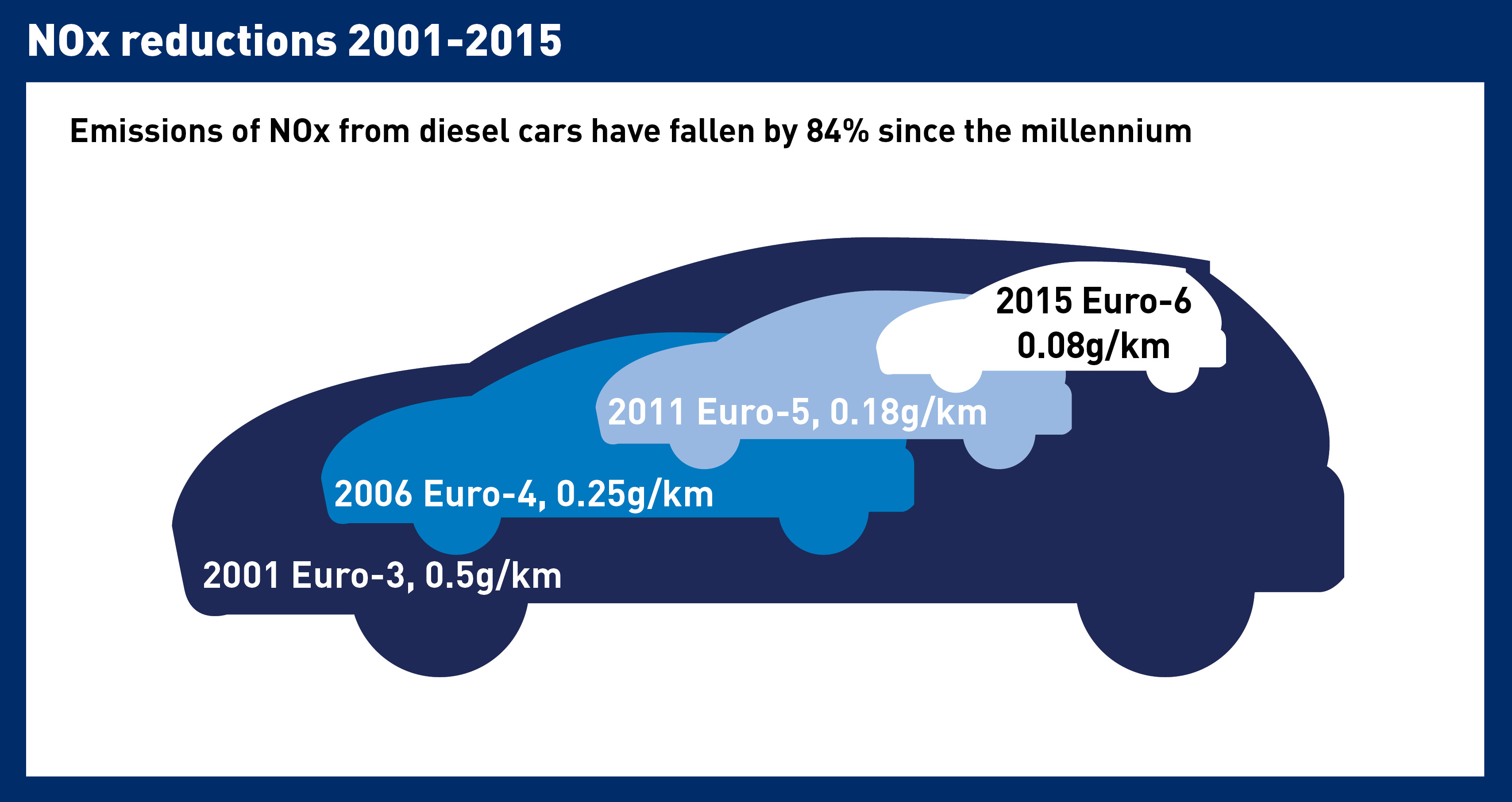 However, research has shown that the stated emission figures on new cars are very often much lower than the actual emissions produced in real-world driving.  In a recent study of 500 diesel vehicles only 8 met their stated emission figures, with highly toxic NO2 regularly 3-5x higher5.  The new European standards also do not apply to existing vehicles, of which there are 11 million on UK roads7.

While ‘today’s diesel engines are the cleanest ever’ (SMMT), it is not only diesel which has been greening.  In Japan, innovation in petrol engine technologies has reduced the amount of CO2 the average car produces without the air pollution associated with diesel.  1 million electric vehicles are expected on UK roads by 20207, and research into other alternative fuels is progressing rapidly.  It is simply not the case anymore that diesel is the best choice to reduce CO2 emissions and fuel costs.

If you drive a diesel car it's not the end of the world, but here are our recommendations for you:

No matter how diesel engines have improved over the last 15 years, the fact remains that the UK has failed to bring its urban air quality within safe levels (WHO).  Buying diesel has not worked, and there are clear market-proven alternatives which mean that you can stay ahead of the trend, which is likely to lead to more ULEZs rolled out across the country, and even the banning of diesel cars in city centres.

5The Telegraph: Diesel car drivers ‘betrayed’ as EU cracks down on Britain over air pollution

7My Electric Avenue: The Growth of Electric Vehicles