Sustainable Direction has had a work experience student in with us this week. Phoebe Rain is studying textiles and biology and wrote us this article. We hope you enjoy it!

Many of us live a lifestyle in which we are slaves to the ever-changing fashions, changing up our wardrobes on a seasonal basis; many of our clothes are worn for less than a quarter of a year before we discard them (or at least stuff them in the back of our wardrobes, wondering why we ever bought them in the first place). Even if we do choose to keep an item of clothing we treasure, it eventually falls apart due to companies building obsolescence into their products as a way to make more money when you go and buy a replacement. Sometimes, we’re so wrapped up in the changing fashions, we forget about some of the wider issues, such as how exactly we are affecting the environment, or how we are affecting the future of our planet.

Many cheap, fashionable textiles items, such as clothing we buy in a hurry from Primark in order to catch up with the current trend, are made from synthetic fibres, a good example being polyester. These fibres may seem a wonder – they are cheap, have many useful qualities for clothing as well as looking and feeling exactly how we would want them to; there’s a problem, though. Synthetic fibres are made from materials such as crude oil and coal – over-used and highly demanded resources.
Crude oil is a fossil fuel which can be turned into plastics in a process called polymerisation. We also burn it to provide energy for power stations and use it as fuels for most vehicles, too. It is in demand all over the world, especially in MEDCs, but is a finite resource, formed over millions of years. In this sense, it is a precious resource, and as we are so heavily dependent on it now we probably will be in the future, too. People, however, discard crude oil products such as clothing (synthetic fibres are plastics) in a carefree manner due to their lack of quality or value. This is extremely wasteful, and a way of life which will be regretted when crude oil deposits become even rarer.

When we dispose of our unwanted textiles items when the fashion trend has ended or the item can’t be worn anymore for whatever reason, most of them end up in landfill sites. Here they are simply buried and left to decompose, leaving a site which is a bit of an eyesore and can never be built on again. Fabrics made from natural fibres will decompose fairly easily, however produce methane during this process; methane is a greenhouse gas, and one of the main contributors to global warming. Global warming is yet another problem many are choosing to ignore that will cause many problems in the future. Fabrics made from synthetic fibres, however, do not decompose due to being made from plastic. Instead, they break down into smaller and smaller pieces, eventually so small they pose the threat of being ingested by animals and causing damage within the food chain.
These would not be as big of problems if the scale of clothing thrown out was decreased to a sensible amount – most materials thrown out could still be used in other textiles items, but most people just throw out the perfectly good fabric due to the product itself becoming broken (as companies eventually intend them to) or going out of fashion. It is this mindset of consumers and this way of companies making money that will eventually put us through times of extreme hardship in the future.

Although our current lifestyle is very wasteful, you can take a few easy measures in order to live in a more sustainable way. 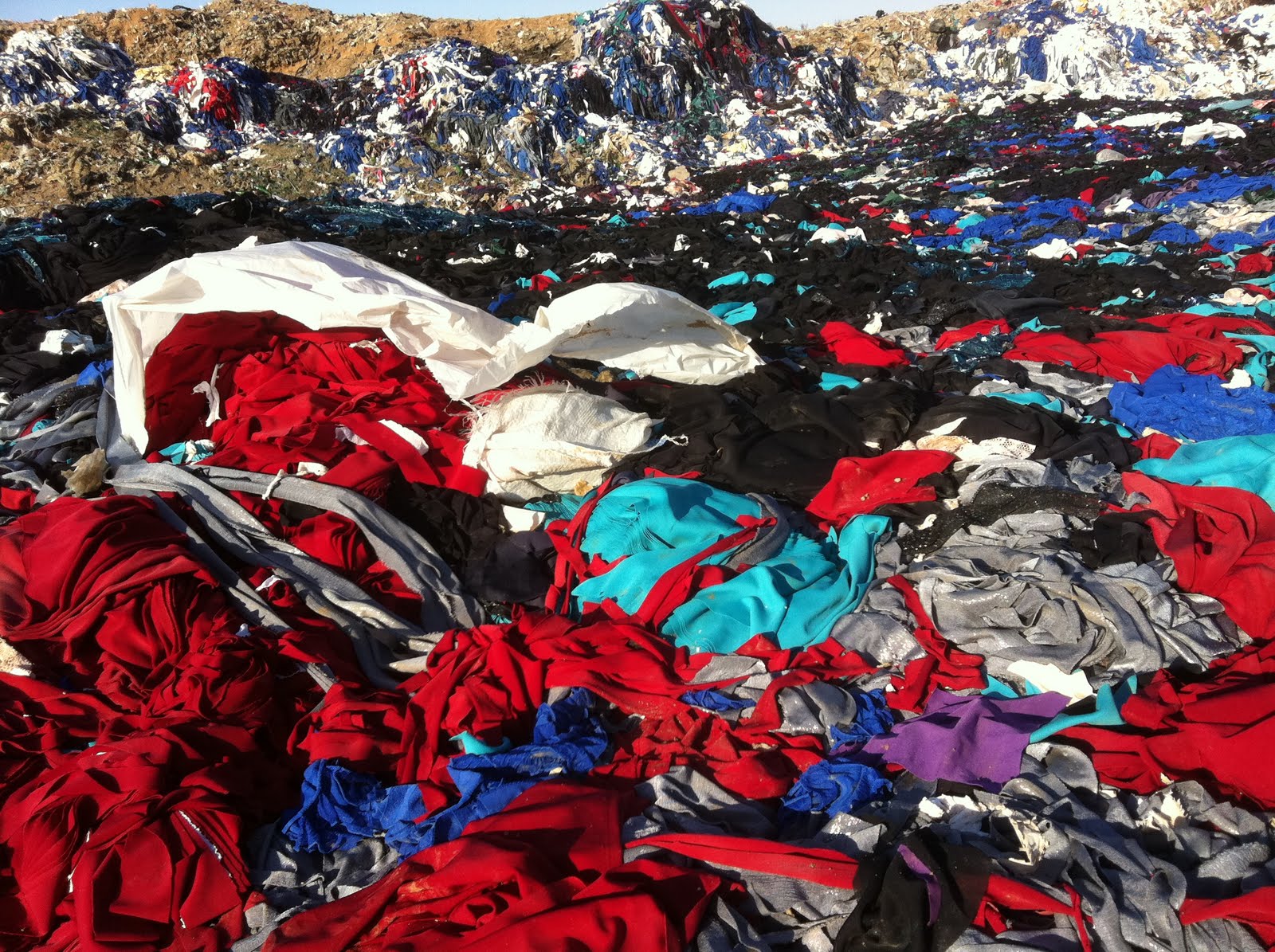 Textiles waste in a landfill in Syria[/caption]